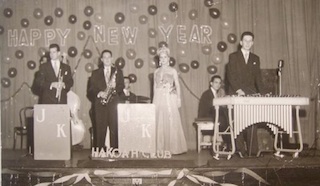 There is a lot written about Personal Branding these days. Some people think it’s a new concept; made possible by the opportunities we have on the web with social media platforms. In reality, from PT Barnum, to the Kardashians, personal branding has been with us since we’ve had media.

Back in the 1930’s & 40’s when my father wasn’t working in the family menswear store, he was the alto sax-playing leader of his own jazz band that gigged at various nightclubs around his hometown of Akron, Ohio. Not only was he the second youngest member of the local musician’s union (his best friend, the brilliant pianist Pat Pace, was the youngest), he wasn’t even old enough be in those clubs when he first started.

My dad was a very cool cat. But he had a personal branding problem..

Cool cats back then (and probably even today) didn’t get high ratings on the coolness scale when they had a last name like “Kantrovitz”. So instead of calling his band “The Jack Kantrovitz Quartet” my dad came up with the name, “The Jack Kent Quartet”.

After a while, this created another problem: half of his friends and acquaintances knew him as Jack Kantrovitz, and the other half knew him as Jack Kent. He even had two listings in the phone book (if you’re under 30 and don’t know what a phone book is, email me and I’ll explain it.)

Finally in about 1954, my father decided to eliminate the confusion and had his last name legally changed from Kantrovitz to Kent. Soon after, his brother took the same route, and that was the demise of the Kantrovitz name.

My father created his “personal brand” to market his jazz band more effectively.  They had a pretty successful run, until he decided to quit gigging and devote himself to the family business and to raising a family. I think he was ahead of his time and growing up with that kind of mindset in the house gave me a head start in marketing.

Having such a “generic” last name has definitely been an asset for my brother, my cousins, and me, too. Our name doesn’t get mispronounced or misspelled very often, which, among other benefits, has made life a little easier for us.