#HashtagsAreEverywhere. You may have even noticed that many TV commercials are now showing hashtags (like #OldNavy) and networks themselves are now embedding hashtags (i.e. #NBC) right into their normal programming – but to what end?

Hashtags are being used on many Social Networks; but on Twitter, where they originated, hashtags are used to build a community of conversations around a subject.  For example, here are tweets about Apple’s recent event wherein Apple unveiled the iPad Mini:

As a business you can become a part of conversations on Twitter by incorporating hashtags into your communications and following hashtags that that are relevant to your business. You can find heaps of useful information that other people are sharing.

But first, let’s get started with some hashtag basics:

2) DON’T add a hashtag to every word in your tweet: 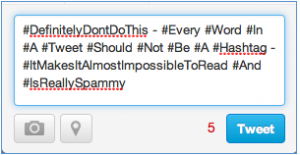 Moreover, hashtags appear as a different color on Twitter so this tactic will make every word of your message look like a link, which people will attempt to click on – this causes confusion, not engagement.

3) DON’T make up your own hashtags that people won’t understand without insider information or the proper context:

DO make up your own hashtags that are relevant to your business, industry, and target audience:

4) DO Use Hashtags to monitor topics important to your business. Some excellent examples include #BizChat – short for Business Chat, #SMB or #smallbiz – for Small Business, and #SMM for Social Media Marketing. 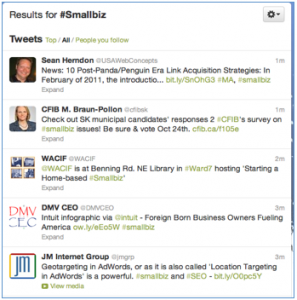 As you can see, in 3 minutes there was a stream of tweets with the #Smallbiz hashtag; from small business surveys, to an infographic about foreign owned small businesses, to advice on how small businesses can better use Google AdWords for their SEO strategies. Perhaps one of these tweets would prove useful to your own business.

5) DON’T use popular hashtags that don’t make sense for your business. 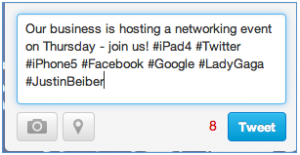 Twitter users will catch on that this tactic is an attempt to grab fans and eyeballs and will ultimately alienate your audience, as opposed to inviting them into your business or brand. Not to mention, the tweet has nothing to do with the associated hashtags.

DO – use popular hashtags (called trending topics) that make sense for you business or brand. For instance, imagine it is Tuesday night and the popular TV show The Voice (#TheVoice) is on and Twitter users are tweeting and following comments on the show by utilizing the hashtag. For this example your business is a popcorn manufacturer and you want to reach this audience and demographic. Hijacking the trending topic will look like this: 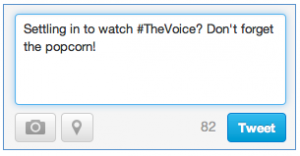 6) DO    Keep your hashtags short and sweet. Tweets are only 140 characters or approximately 15-20 words.

Keep in mind: the number of characters in a tweet is prime real estate, and the shorter the tweet the better. Make sure other users can retweet your message, including RT @YourTwitterName in the remaining characters of the tweet. For example: 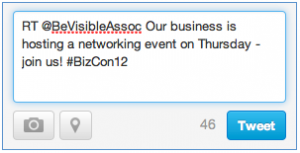 There’s still plenty of room for your followers to retweet you, add a comment, or even have their followers retweet your original tweet!

We recognize we’ve only begun to scratch the surface of hashtags so be sure to stay tuned for later blogs where we further address: hashtag research, how to best utilize trending topics, using hashtags to market your event, and much more!