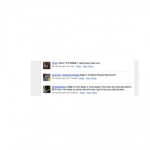 When I was in college, I studied Anthropology. I guess you could say that the study of human nature is my first love. All these years later, I find that I am still interested in how human beings create communities and behave inside them. And I have discovered that Twitter is an incredible snapshot into American culture.

I spend a lot of time searching on Twitter for people who are mentioning my clients, their competitors, their type of products or the services they provide. In the course of this research,  I have discovered that Twitter users (who are not marketers, but just regular people) Americans tend to fit into 4 categories:

Never before have we been able to easily glimpse inside the minds of total strangers. Questions come up: How does someone’s tweets reflect their true personality? How much of human personality is defined by local culture? What image do people have in their minds of their audience?

Do most tweeters understand that Twitter is a totally public platform? If so, then how do we interpret the fact that most people have no issue telling the entire world who they are, where they live, and what they are doing at any given moment? Will this new transparency that is taking over our culture neutralize the dangers of being so publicly exposed? How much lasting influence will Twitter and other public forums have on the English language? How much can one ascertain about American values from Twitter? Do people tweet the way they speak?

What do you think?