A while back, I was scanning my Twitter newsfeed when I saw a tweet from Twitter themselves incentivizing users to try their first $100 worth of Twitter advertising for free. At Be Visible, we are always looking to try and test new tools for our clients, so naturally we dove right in. Here’s what we found:

Upon logging in to Twitter Ads (https://ads.twitter.com/login) with your Twitter Username and password, you will be prompted to provide a location you would like to target with your advertisements. This can be as expanded as “Worldwide” or as granular as a city’s metropolitan area. Be Visible is located in the NYC metro area so for the sake of this exercise I chose to target that area.

*Note: I used my personal account since we did not have a voucher for Be Visible Associates at the time of writing; my findings for Twitter ads are the same for personal accounts as business accounts.

After choosing a desired location for your ads, Twitter will ask what type of ad you would like to run: the first being “Promoted Account.” Promoted Accounts appear on the left side of the Twitter newsfeed under “Who To Follow” and are designated by a yellow arrow and the accompanying text “Promoted.” 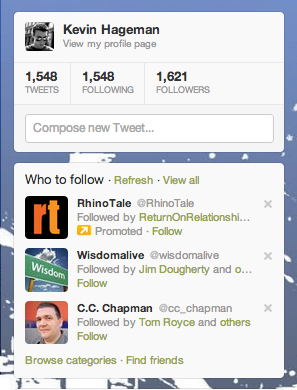 Next, you must set a maximum bid for what you are willing to pay for each new follower. Twitter suggests the minimum bid to be at least $2.50 per follower. This means you will be charged between $0.01 and $2.50 and only charged for each new follower your ad generates. Based on a $10 daily budget with a maximum bid of $2.50, Twitter determined I could expect approximately 13-19 new followers a day. I will explain the results later in this blog, but first I will explain the second ad unit, Promoted Tweets. 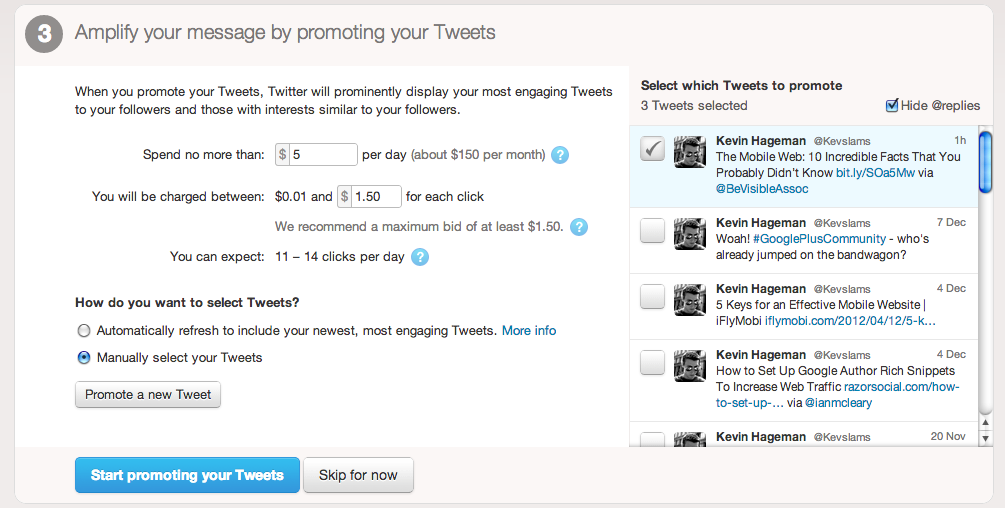 Promoted Tweets are a type of Twitter advertising which makes individual tweets (which you can choose or Twitter can choose for you) appear near the top of your followers’ newsfeeds and in the newsfeeds of people Twitter has identified as having similar interests to your current followers.

Like “Promoted Accounts,” with “Promoted Tweets” you will have to set a daily budget and a maximum bid for each click-through on the link you’ve included in your tweet. To test Promoted Tweets, we started with an initial daily budget of $5 and a maximum bid of $1.50 for each promoted tweet. Twitter determines that I could expect 11-14 clicks a day per tweet with this budget. We promoted the following four tweets: 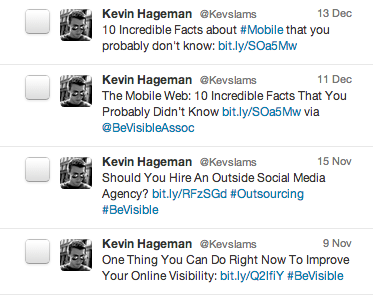 After ten days of promoting my account to the NY metro area, 11,500 people were suggested to follow my account in “Who To Follow,” I received 39 new followers, and spent $47.61 (an avg. cost of $1.22/follower). Here are our thoughts on the data:

Promoted Tweets, however, proved to be much more successful:

After 37 people had seen this tweet no one had clicked through. I immediately stopped running the ad. Notice the “via @BeVisibleAssoc” at the end of the tweet – perhaps this nuance in copy prevented people from clicking through. I changed the tweet to:

Adding a hashtag (#) in front of “Mobile,” altering the order and diction of the ad text, and removing “via @BeVisibleAssoc” made the tweet much more compelling for users to click on. Noticing that people were drawn to this tweet, we increased the daily budget to $10/day while keeping the maximum bid the same. After several days of the ad running, 2,648 people read (or at least saw) the tweet, and 78 clicked-through to our website. It may not be a coincidence that the linked blog post from our Promoted Tweet ended up being featured on Business Insider.

The third tweet we promoted utilized a daily budget of $5 and maximum bid of $1.50, was a recent guest post on our blog, and utilized two hashtags. After 2 days of running the ad, 317 people had been exposed to the ad, and 8 people went to our website. I decided these results were not strong enough and stopped running the ad.

The fourth and final tweet I promoted started with an initial budget of $5, a maximum bid of $1.50, and utilized only one hashtag – our company which gathers meaning unto itself in the context of online visibility and marketing. After one day of running the ad, lots of people were seeing the ad and clicking through to our blog post so we raised the daily budget to $10/day.

By spending only $50, Promoted Tweets allowed our tweets to be served to nearly 4.5K people, drove 126 people to our website, and it may have helped in landing us a great piece of press. In our mind, this was $50 well spent indeed!

Has your business tried advertising on Twitter? Were your results similar to ours? What worked, what didn’t work?

Want help getting started with Twitter advertising? Leave us a comment below and we’ll see what we can do for you.

You can also find our recent blogs on Twitter helpful: